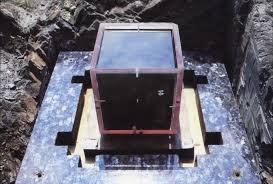 media of the universe

Made possible through grants from the Massachusetts Council on the Arts and Humanities, the Rockefeller Foundation, and the National Endowment for the Arts, a federal agency

Over the span of a decade, Burgess worked with NASA to launch the innermost cube of Boundless Cubic Lunar Aperture into space, making history as the first officially sanctioned work of art in orbit. After its arrival back on Earth, Burgess placed Boundless Cubic Lunar Aperture in a 400-million-year old glacial rock at deCordova on the shores of Flint’s Pond, connecting the skies above to the earth’s geological formation. More info...